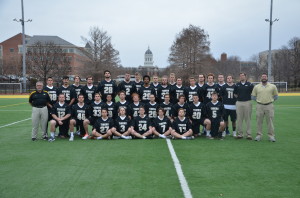 Coming off a big win over Central Florida the night before, the Wolfpack started hot, scoring the first ten goals of the game. While Missouri out-scored NC State over the final 20 minutes of the game, the early deficit was too much for the Tigers to overcome, as the team lost to its second SELC opponent in two days.

Mizzou’s offense produced a balanced attack, with players tallying shots on cage, the most since Missouri’s 13-0 win over Oklahoma State February 21. Leading the way on offense for the Tigers were senior midfielder Drew Roither (Wildwood, MO, Lafayette) and senior attack Grant Pieper (Plano, TX, Plano Senior) who each had two points. Roither scored two goals and Pieper tallied a goal and an assist. With the goal, Pieper notched a point in his 30th consecutive game, moving him in to sole possession of second-place in Mizzou history.

Please visit the Mizzou’s MCLA page at mcla.us/team/missouri for game times and make sure to follow @MizzouLacrosse on Twitter for all the latest information.