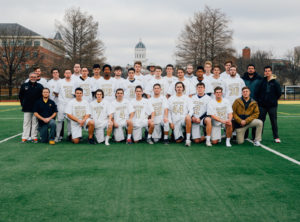 COLUMBIA- The University of Missouri Men’s Lacrosse team defeated Missouri S&T and Illinois State at Stankowski Field on Friday and Sunday to start the 2017 season 2-0.

This is Missouri’s first 2-0 start since 2014, the last season the Tigers won a GRLC West Division regular season title.

On Friday evening the Tigers started of the 2017 season strong, shutting out the Miners 20-0. This is the second season in a row the Tigers shut out an opponent over the home opening weekend, as Missouri shut out Oklahoma State 13-0 in 2016. Missouri spread the ball well on offense as 14 different players scored points in the win.

Leading the way on offense was sophomore attackman Noah Iversen (St. Louis/Desmet Jesuit) who dished out an six assists while netting three goals. Also performing well for the Tigers was the face-off unit of freshman Collin Schott (St. Louis/Ladue) and sophomore Caelan Morgret (Columbia, MO/Rock Bridge) who went 10-15 and 8-8 from the X respectively.

On Sunday the Tigers came out to avenge the team’s 6-5 loss in 2015 to Illinois State, defeating the Redbirds 15-3. The Tigers onslaught continued, with ten players scoring, five of the ten with multiple-goal games. Again leading the way for Missouri was Iverson, who tallied his second nine-point game of the weekend with a two-goal, seven-assist effort. Also helping out for the Tigers was sophomore attackman Grant Long (Wayzata, MN/Wayzata) who added three goals and two assists to the team’s stat line.

Up next for Mizzou is a road trip to Nashville to face Vanderbilt and Auburn. Vanderbilt is 2-0 on the season with wins over Tennessee and Texas Tech, while Auburn in 0-2 after falling to SMU and TCU opening weekend. This series will start a stretch for Missouri where the Tigers will play six of the next seven games on the road.

Please visit Mizzou’s MCLA page at mcla.us/team/missouri for game and field information during the road trip and make sure to follow @MizzouLacrosse on Twitter for all the latest information and live updates during each game.