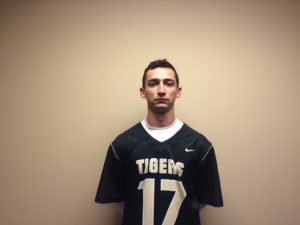 Pieper reached the mark after a goal in the first quarter of the game in Ames. He finished his achievement-setting performance with five goals and six points, both highs for him on the season.

“This is a really exciting moment for myself and the program,” Pieper said. “I’m honored to be at this point in my career and I can’t thank the Mizzou Lacrosse community and coaches enough for getting me to this point.”

A 2014 GRLC honorable mention midfielder and 2015 second-team attack, Pieper is sad for his career wearing the black and gold to be in its final few weeks.

“These final regular-season games and my final games on Stankowski Field are very bittersweet for me. I’m excited to see the team perform, but it’s going to be sad to wrap things up on this field.

On Friday April 22nd Missouri will play Iowa and on Sunday April 24th the Tigers will square off against Nebraska on the team’s senior day.

Mizzou will need to win one of its final two games against Iowa and Nebraska for a berth and wins in both games for the second-seed in the GRLC West.

Please visit the Mizzou’s MCLA page at mcla.us/team/missouri for Nebraska and Iowa game times and make sure to follow @MizzouLacrosse on Twitter for all the latest information.