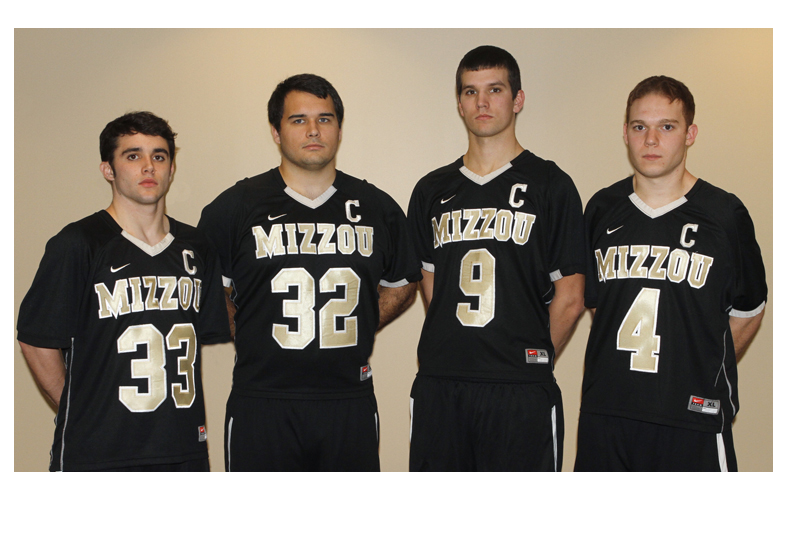 Josh Nelson (#33) is in his second year as a captain and also serves at the club’s president. Last year, Nelson led the nation in ground balls (92) and was also among the top three players in the country for goals (3) and assists (5) at the long stick midfielder position. He was nominated for All-American and received 2nd Team All-Conference honors. “Josh is a true leader of the team. His attitude, drive and work ethic are second to none. He really sets the bar for the team and drives everyone to be better,” said Head Coach Keith Euker. “The guys really look to him for guidance, particularly the freshman.”

Eric Chole (#32) is also in his second year as a captain of the Tigers’ squad. Chole is a four-year starter for the Mizzou defense and is consistently covering the competition’s most lethal attackman. Chole was nominated for All-America honors, and received 1st Team All-Conference honors for 2010. Coach Euker had this to say, “Eric is a true leader by example. He gets the job done. His nimbleness, speed and athleticism are uncanny for someone with his frame and strength. In high school, he bench-pressed 410 lbs…that’s scary.”

Cory Kaufman (#9) will look to build upon his breakout season last year. Kaufman led the Tigers in assists and was second on the team in goals, earning him All-Conference honorable mention. “Cory is an extremely intelligent lacrosse player,” said Coach Euker. “He has the ability to see things before they happen. He is the quarterback of the offense and does a great job of managing the game.”

Sean Hogarty (#4) will be between the pipes again this year for the Tigers. During the 2010 campaign, his save percentage was consistently above 60 percent, giving up only nine goals or fewer in all but two games (Texas State with 12, Wisconsin with 11). Coach Euker described Hogarty as “a very intelligent lacrosse player. His quick grasp of concepts both defensively and offensively make him a leader on the team. He is very vocal, which is what you want in a goalie. He’s made some of the craziest saves I’ve seen, both in games and in practice. We feel very comfortable having Sean in the goal.” Hogarty will look to anchor an already solid defensive front again this year.