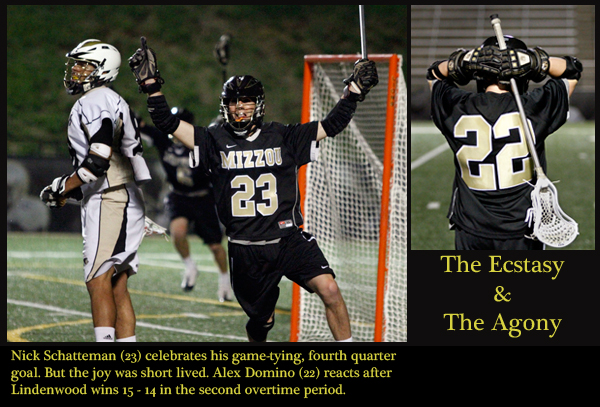 It was like watching Newton’s Third law of Motion in action: for each goal, there was an equal and opposite goal. And that’s how it went Thursday night when the University of Missouri and Lindenwood University squared off for a conference game.

Mizzou’s Gerry Leonard drew first blood, but Lindenwood quickly retaliated. Two minutes into the first quarter it was already 1-1. It was a wonderful offensive battle between the two teams, who share a lot of respect but not much love for each other.

The second quarter started with a 3-2 Missouri advantage. They built what appeared to be a 5-2 lead, but the fifth goal was disallowed: the referee said he did not see the ball go in the goal, so the goal was denied. 4-2 Missouri.

Mizzou took a 7-6 lead into halftime, but Zach Nisson, Mizzou’s top scorer, had yet to score a goal.

“Anytime your leading point getter has a cold night, it’s going to be a long haul,” Coach Keith Euker said. “Some games you just can’t get it done.”

“I think the positive from that is that the rest of the team really stepped up,” he said.

The tug of war continued through the third quarter. It wasn’t until the fourth quarter that either team gained more than a two-goal advantage. Missouri went into a scoring slump that allowed Lindenwood  to build up a four-goal lead. With just 5:37 left in the game, Mizzou was on the short end of the 13-9 score.

“Anytime you’re down by three goals with a 1:50 left, that says a lot about the character of this team. We just don’t quit,” Euker said. “I’m so proud of them for having that mentality because that’s not something you can teach.”

With adrenaline high and the force of hundreds of cheering fans energizing the stadium, Mizzou keeps pounding away. 14-13.

With just seconds left, defensive middie Nick Schatteman runs the clear from the defensive end, shoots from about five yards out and scores. At the end of regulation, the Tigers and the Lions are tied, 14-14.

The teams killed the first overtime period, going five minutes with no score.

Lindenwood put a stop to the contest just 1:07 into the four-minute second overtime period, taking a 15-14 win.

“Guys have all agreed to step it up to the next level. We’re meeting Sunday to watch game film because we don’t want to waste Monday inside when we need to be outside practicing. And that was their call.”

The loss puts Mizzou at 0-1 for the conference, 9-3 overall. There are three games remaining in the season, with two of them being conference games.

Euker’s take on the rest of the season:

Kansas: A non conference, border war game. They have been beating up on the teams they’ve played and winning by large margins. They’re a strong team that Missouri won’t be taking for granted.

Miami (Ohio): They’re having a good year, currently with a 7-2 record.

Indiana: They’re going through a rebuilding phase and are 2-10 right now. But they have just one conference loss and are a threat to go to the conference championship tournament.

Go to the photo gallery