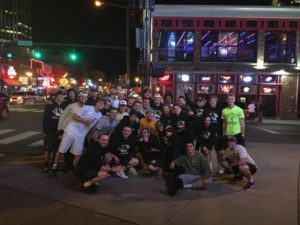 With the win against K-State, Mizzou 4-8 (1-1) remains in contention for a spot in the GRLC tournament April 29-May 1 in St. Louis. The team will need to win one of its final two games against Iowa and Nebraska for a berth and wins in both games for the second-seed in the West.

Against Kansas the Tigers came out slow, giving up five goals to the Jayhawks in the first quarter. While the team came back to cut the lead to 5-4 at half, the deficit wasn’t enough for the team to overcome as the Jayhawks took back the Border War sword for the first time since 2009.

In the Missouri’s second game of the day, the team handled Kansas State, defeating the conference opponent by 14. The offense looked strong throughout the game, shooting 32 shots on cage.

At the face-off x, senior Phil Bergman (Media, PA, Strath Haven) went 26 for 28 with 24 groundballs, a team-high for the season.

The Tigers will take the field next weekend for their final road trip of the regular season, taking on out of conference opponents Minnesota and Iowa State in Ames, Iowa. Minnesota will be Missouri’s third top-25 opponent of the season as the Golden Gophers are ranked No. 25 in the latest MCLA polls, while the Tigers will be looking to defeat the Cyclones for the third year in a row after beating the UMLC squad by one goal the past two seasons.

Please visit the Mizzou’s MCLA page at mcla.us/team/missouri for statistics and scores and make sure to follow @MizzouLacrosse on Twitter for all the latest information.