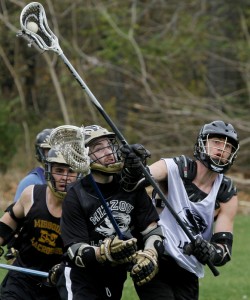 Experience won out over youth in the annual Alumni Game held Sunday, Oct. 24, 2010. With the formidable duo of Eddie Hedrick and Pete Stirling sharing goalie duties, the young blood studs weren’t able to find the back of the net very often.

The men worked to a halftime tie of five goals each. There were some questionable calls from referee Keith Euker, who never moved more than 10 feet to make a call but was convinced that all of his calls were correct.

But the alumni turned up the heat in the second half, lead by Mead Brodeur, at face. Young Bloods face-off man James Stannard, realizing he’d be fruitless at face against Mead, feigned injury and did not play.

Stepping back into his regular role, Coach Euker took some time after the game to update the alumni on this year’s team. Euker expressed his excitement for the coming season, coming off the three-win day in a tournament the day before. Even without some of its best players, the team beat Fontbonne, Missoui Baptist and — the biggest win of the day — Lindenwood. Euker noted the deeper pool of talent this year (with no disrespect to last year’s players) and the number of good recruits.
Euker said that the team is moving in the right direction, trying to build both a strong team and a strong statewide reputation. “A lot of people are seeing the hard work we’re putting in,” he told the alumni. One of the things that is being done to build the team is a stronger strength of schedule. This year Missouri will scrimmage some of the teams that were scheduled for games last year. The feather in coach’s cap this year is the scheduling of a game at Michigan in April. Missouri looks at Michigan as a great model for the future of the Missouri program.
Also built into this season are more games at night and in/around St. Louis, trying to create more opportunities for fans to get to the games.

Other notes:
• Nov. 6 game against Missouri State will be our recruiting weekend
• The Kansas game at home on April 22, 2011, will be our Breast Cancer Awareness game
• The Spring Break trip will be in Texas instead of Arizona. Go to our Schedule page for updates
• Tim Cahill is the new president of the Missouri Lacrosse alumni group.
• MORE PHOTOS!