I received e-mails from several players from the 1990 team this past week .  Mark Allen is in Austin, Texas, and although he said he doesn’t play anymore, in his spare time he is an assistant coach at Westlake High School in Austin. He was gracious enough to e-mail me the names of some of the players on the team and provided some brief comments about some of them.  His memory is much better than mine.  Also Steve Zumwinkel contacted me.  He is in Venice Beach, California.  Steve provide names for several other players and just today I heard from Tim Woolsey who is a language professor at Penn State University. He is also coaching lacrosse.  Tim surprised me with a couple of pictures of me in the goal and him playing defense, along with a picture of him and the team he coaches.  I also discovered that Ron Koder from that team is a physics professor at a university in New York and Ian Noyes is a pastor in the Tetons! Let me know where you are and what you are doing. hedrick.eddie@yahoo.com 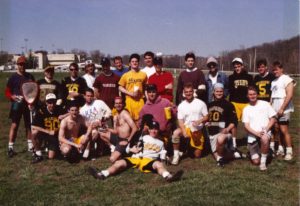 (Help me fill in the blanks)

Just received some help from a couple of players from this team:  On Jan. 29, 2015 I received this e-mail from Clay Scanlon:

Hi Eddie,
A KU lax friend of all people pointed out that I was a “fill in the blank” on a picture and web page that I didn’t even know existed. I am
in the front row wearing the Arapahoe Lacrosse Jersey. Reading through the page brought back some foggy memories of playing in ’89 & ’90. Of
all the road games I particularly enjoyed the two to New Orleans for the Mardi Gra  tournaments.
I picked my stick back up after about 15 years and played for the NCFD team (Nassau County Fire Dept.) in Long Island, NY. The team consisted
of volunteer firefighters and EMT’s through out the county. I now just watch my two of my kids play with the third soon to start. My 11 year
old son primarily plays goalie but fills in as a middie when needed. My 9 year old daughter is still not sure what position she will settle into.
As far as my life since MU – I went back to Denver for about 8 years and met a New York girl. After a couple of years of marriage we moved to
Massapequa, NY in 2002 where we currently reside. I am currently working as an Account Executive for a Trade Show Display and  Design firm.
Thanks for taking the time to put together the Alumni page.  All the Best,  Clay Scanlon

Interestingly two days later I received another e-mail from Blane Day from the same team:

Hey Eddie,
Good to see Mizzou Lacrosse is thriving. Front and center in the group pic is Terry Williams and my old border collie Marley.  That pic brings back many fond memories.  Sure my green VW van is on the sidelines with the keg.  I have some stuff to donate.  I have that program from the tournament we played Marquette in.  I think we won that tourney.  You may have it, at least the cover and roster.  Also have a scoring book.  Is there an archive, i have my helmet and jersey i believe.  Let me know.
Blane

On March 27, 2015 I received another e-mail from a blast from the past. Terry Williams (holding the dog in the photo above) wrote:

This is Terry Williams, the midfielder sitting front and center in the photo with Blane’s dog Marley. I wanted to thank you for putting together the alumni page. It brought back many fine memories. I work as a Product Engineer for A-J Manufacturing Company in Kansas City, MO. I live on a small acreage just east of Lawrence, KS in the Kaw River Valley. My oldest son, Rex who just turned 7, is just beginning to learn the game. I still have my Mizzou Lax jersey, and gear!

I can’t say enough great things about that group of guys in the photo. Ed McFadden was a monster at attack. Blane Day and the Kingsley bros were relentless midfielders, and our defense and goal keeping was tough as nails. I don’t think many teams liked playing us. What we may have lacked in skill was more than made up for in passion, perseverance and grit! The more skilked players were eager and patient to teach others who were newer to the sport, and the team was close both on and off the field.

I see Blane holding a trophy. The photo is at our home field down at the old Reactor Fields. I am guessing, if my memory serves me right, that was for winning the Midwest Shootout that year? We hosted the tournament and I believe we beat KU in the semi, and St. Louis in the final, but I may have that wrong.

I do remember, however, that our roadtrips were EPIC! And I have some wild if not very hazy memories of the tournament in New Orleans! I think the entire team slept in one or two hotel rooms! Again, thanks for putting this page together. I actually have, some old VHS video footage of this team somewhere in my house if anyone is interested.

Thanks for the help guys-great to hear from you!

These are the photos Tim Woolsey provided. Above: Tim is number 45 and the goalie is Eddie Hedrick (Who is #33?).  The third picture is Tim and the team he currently  coaches (2014).  Below in the first pic is Rob Burke with a pole, 2nd is Tim Woolsey and Blane Day, 3rd is Woolsey and Koder and the 4th is Woolsey and Burke on defense.

I love how these guys just kept beating up on Kansas teams!

The Missouri Shootouts were great.  They were usually played at Reactor Field which is now a parking lot! People would see the games from Providence Road and come over to watch. Often a lacrosse vendor from New York or Baltimore would bring a trailer full of lacrosse gear to sell at the games.  I still have my T-shirts from these games. Girl friends, wives, and significant others would tailgate or picnic as these were all day events.  In those days it would not be unusual for a keg of beer to be somewhere on the sidelines for the after-parties! 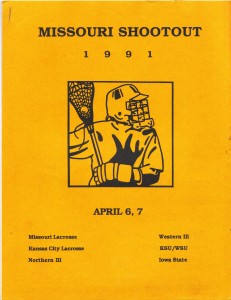 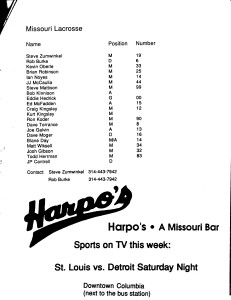 As you can see in this article, Eddie McFadden continued his historic dominance.

I haven’t found any materials from this time period so if you have anything please send it to me at hedrick.eddie@yahoo.com.

Coach Kyle Hawkins came to Columbia to teach history at Hickman High School.  Previously he had taught at Hazelwood Central High School in St. Louis where he also coached the varsity lacrosse team. When he came to Columbia the Mizzou Lacrosse program was in disarray.  He contacted one of the previous Mizzou players that he knew (Keith Templin) and together they put the team back together.  Kyle was an alumnus of Arizona State University and grew up in St. Louis.  He was a very successful coach at Hazelwood Central and for several summers  coached at NIKE lacrosse camps throughout the United States and Canada and had a great fundamental knowledge of the game. Coach Hawkins was the first paid, full-time Mizzou coach. Joining Hawkins as assistant coaches were Jerry Swope, who played outstanding attack at Brown University,  Eddie Hedrick, an All-American Goalie at Bowling Green University, and Steve Byrne, a three-time All American defenseman at Virginia.

The 1999 team was composed of players from several parts of the U.S, however the majority of the team learned lacrosse in Missouri.

The year started off with a couple of fun tournaments held at Epple Field (where the new tennis complex is located now). 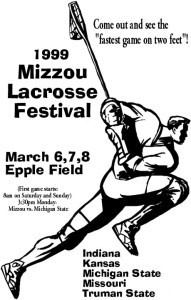 “The Missouri Tiger Lacrosse Club opens its home season this  weekend.  The home opener will be in the form of a lacrosse festival with five teams competing: Indiana, Kansas, Michigan State, Truman State and Missouri squared off in a three-day lacrosse festival.  This year’s Missouri squad is the first ever to have a full time coach.  Kyle Hawkins will coach a team of Missouri lacrosse players that primarily come from the St. Louis area.  The festival will be held on Epple Field and will begin at 8am on Saturday March 6, and Sunday March 7, 1999.  The following is the schedule for the games:

In 1999 the team finished with an 11-4 record and was invited to play in the NIRSA National Championships in Austin, Texas, where they finished fourth.  Photos from the NIRSA Tournament and game results are below. 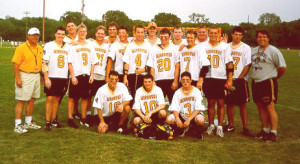