A few days ago (4-27-14) I recieved an e-mail from Jim Olson.  Jim was the player coach/President for the 1982 season.  He was nice enough to send a picture of the 1980 team and some brief history.  He was on the team from 1979-82.  He stated he thought the team started around 1976, which is consistant with our records and previous accounts.  He said that Steve Petrecho was the player coach/President when he started playing in 1979.  They used to get around 6 players to practice and around 13 for games.  Occasionally they used non-university players to fill in.  Their teams never had a losing record during his time there! In 1981 they started advertising for players and the turnout improved (15 for practices and games) which was a great improvement.  By 1982 they had about 18 players with 3 full midfield lines.  This was important back then because mid-fielders played both offense and defense.  They finished the 1982 season with a 7-3 record winning the Creighton, Knox College and Mizzou Tournaments.  In 1983,  Jim Souhan, who is now a pro sports writer, and columnist in Minnesota took over as President..  Jim suggested that I contact him for more history and I will.  Mizzou opponents back then included Crighton, Iowaa State, Wash Univ., St Louis, and  “Windy” Cities from Chicago.  Washington University was their biggest rival.  Below, the first photograph is a picture that Jim sent which was included in the 1980 Savitar. (Jim Olson is in the front right).

On 7-14-14 I also recieved an e-mail from Kevin Concannon who also played in the early 1980’s.  Kevin sent a roster from 1982 which includes Jim Olson, and Mark Watts who was also in the picture of the 1980 team.  He also included a picture of the team playing on a field in front of the Arts and Science building (?)  and across the street from Rollins dormitory. ” Looks like what is now called the Bond Life Science Center”.  In that picture Bob Garrison is taking a shot on goal. Kevin stated that Bob was a converted defenseman who “would have been an excellent LSM if anyone knew what that was when we played”!  The uniforms they wore were white with black numbers and were hand-me-downs.  Most were extremely large on the Lax players o may have come from the football team.  He also included a roster from the fall of 1982.  A small number of the players played before coming to Mizzou.  Jim Olson was from Long Island, Jim Jouhan spent time in Baltimore, and Steve Sweringen was from Virginia.  The rest picked up the game while at Mizzou.  Kevin said that he and two others from his dorm floor (Charlie Hildebrand and Bob Garrison) decided to join the team after they saw a Pepsi commercial on TV showing lacrosse players showing off impressive stick skills during a pick-up game.The astericks in the roster denote how many years the person had played at Mizzou.  Kevin has passed on his love of the game to his son who has played since 6th grade and was recently named an academic all-american by US Lacrosee!  His team went to the state finals in 2014 (North Carolina Independent Schools) but lost to a very good team in the Championship game..  He goes to college this year and Kevin hopes he will continue his lacrosse experience. “Mizzou Lacrosse lives on in a second generation of players”! (See pictures and roster below)

1986 was an interesting year with several articles in the local media.  Did you know that from 1976 through 1986 the Mizzou lacrosse team never had a losing record?  Did you know that a Mizzou lacrosse player died during a Mizzou game?  It was a real tragedy for the team but in the last article you can see how the team responded in his memory. Look at the articles below and see exactly what happened.  Thanks to “Iron Mike” O’Brien for the articles.

These Maneater articles are great. The first article really sets the tone for Eddie McFadden’s historical career at Mizzou and the rivalry between Mizzou and the Kansas teams.  I love some of the nicknames “Iron Mike” O’Brien,  “Mad Slasher” George Crawford, “Big” Ed Dawson.  See the 1988 Shootout roster below for a whole list of the nicknames these guys had.  Would love any pictures from this era! hedrick.eddie@yahoo.com

Checkout the nicknames in this 1988 Mizzou Shootout program. 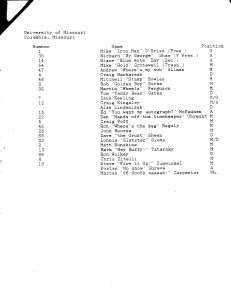 Missouri has had its share of great lacrosse players over the years.  Up until 1989 Paul Foster had established himself as the most prolific scorer Mizzou had ever had.  The story below really shows how Eddie McFadden rewrote the history books at Mizzou.  It also mentions the outstanding goal tending that Mike O’Brien gave the Tigers along with Blane Day at the midfield and it mentioned that Ron Rugely won 81 percent of the faceoffs in the tournament for Mizzou! Great players at a time when lacrosse was just getting jump started in the Midwest. 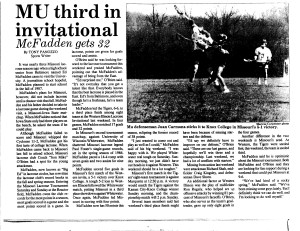